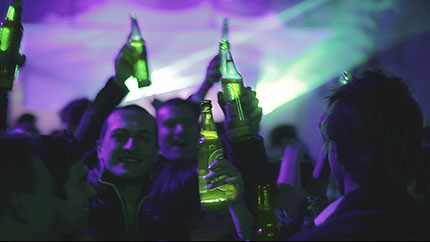 Going for a beer has always been a simple business. You order what you want, hand over you cash and get a nice pint or bottle.

However, with Euromonitor revealing that sales have fallen by 2.3% – 2.5% over the last three years in Germany and the US, the two biggest beer markets, manufacturers are looking to sex up the experience with innovative technology.

"Big beer manufacturers have been resting on their laurels for too long," says Spiros Malandrakis, senior analyst in alcoholic drinks at Euromonitor.

"Craft brewers are so much more agile, they can change things around and bring out new variants almost every week, which appeals to the younger audience. That leaves the big brewers with three choices if they want to fight back – buy out the microbrewers, develop their own new flavours or look into ideas that will have a novelty effect such as packaging."

The first results of this new push towards technology were seen at Milan Design Week in April, where Heineken unveiled Ignite, the "world’s first interactive beer bottle".

Made up of LEDs, a microprocessor, motion sensor and a wireless network transceiver, the bottles are designed to light up when you drink or clink them. They can also be set to light up in time with the music in a club.

"Heineken has a passion for progressive design and innovation," says Heineken’s head of digital Paul Smailes. "We wanted to develop an idea that would re-invent the nightclub experience unlocking the power and possibilities of mobile innovation and technology."

"The hardest part of innovation is making it happen within the increasingly fast pace that new technologies and innovations are rolled out. Heineken recognised that it needed to adopt the principles of lean start-ups and together with Tribal DDB Amsterdam, implemented the ‘Spark’ process, which provides a complete development path including research, brief, ideation, development, consumer validation and prototyping within the period of just ten weeks."

Just after Heineken showed the world Ignite, Budweiser gave us a glimpse of the Buddy Cup. Designed by a team in Brazil, the cup has a built-in chip integrated with Facebook so that when two consenting users clink glasses, they are automatically connected on the social networking site.

"The Buddy Cup brings together the in-bar experience with Facebook, the most used social media channel for our consumers," says Budweiser spokesman Manuel Rangel Macchiavello. "When it was tested at a pilot event in São Paulo it was an instant success. Budweiser plans to roll it out at bigger events in the near future."

However, the Buddy Cup concept has not proved universally popular. Lots of people has raised concerns over the safety of allowing strangers instant access to your personal details and Adweek went as far as to describe it as potentially the dumbest high-tech brand innovation yet.

"Because the world needs another uselessly hi-tech advertising innovation," wrote Gabriel Beltrone in the Adfreak section of the magazine. "And because the bar for being Facebook friends these days needs to be even more like blinking at a stranger passing on the street."

Ignite and the Buddy Cup are both in development with a view to some form of potential roll-out in 2014. However, with production costs likely to limit their appearances to special events or releases, the big brewers will have to look elsewhere in their attempts to wrest back sales from the microbrewers.

"The Buddy Cup may create a brand halo for a while but the shift towards the microbrewers goes beyond packaging," says Spiros Milandrakis. "Ignite is a more relevant idea because it focuses on the moment but neither are going to change the way the industry operates.

"Another trend to look out for could be crowd sourcing. It’s an interactive process that gives people the chance to participate in the formulation of flavours. Tesco recently crowd sourced a wine and Kopperberg have done it with cider. It’s an idea that’s gaining more traction and craft brewers are way ahead of the big boys in doing it.

"Social media is another area that could be used much more by the big brewers. Again the craft brewers are way ahead in terms of numbers of followers and the way they interact with people on sites like Twitter. Big brewers are seen as being very corporate but they are starting to wake up now to the idea that they need to be better at things like Twitter if they want to fight back."