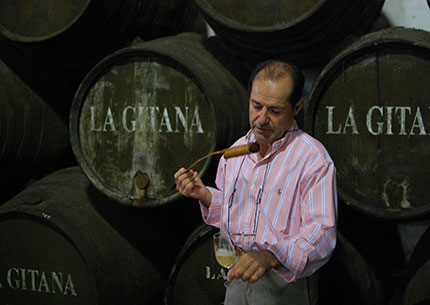 We’ve all been sent out on the drinks run at Christmas time by our families. As we battle against the wind, rain and swarming mass of last minute shoppers we know we’re on a mission to bring back a bottle of the infamous cream sherry, the kind that granny’s seem to love drinking in copious quantities.

Despite many of our fond memories, sherry is no longer the drink that gets your grandma dancing on the kitchen table at Christmas; it has seen resurgence of late in upmarket bars and restaurants in New York and London.

Bodega in the city: a trend spreading across the world

All over the world wine lovers are coming down with sherry fever as more and more sherry bars pop up in cities such as London and New York. In New York sherry lovers can choose from a variety of sherry bars including The Beagle, Palo Cortado and Terroir whilst London has to offer Barrica, Rosita and Bar Pepito, the first sherry bar in London, to name a few.

The Beagle has one of the longest lists of sherries available by the glass in New York. Dan Greenbaum, co-owner and bar manager, said The Beagle stocked such a wide variety of sherry because "there is such variety even within a particular style and I like to be able to represent the depth and complexity that can be found even within a single style such as fino.

"We sell more fino and manzanilla than oxidative styles of sherry. Dry sherry outsells sweet sherry by a large margin."

Another winning quality of sherry that Greenbaum notes is its shelf life, which is longer than unfortified wine. This allows restaurants and bars to be able to pour half bottles and still serve fresh wine.

As the organiser of New York’s first sherry festival and author of a book on sherry Peter Liem quite rightly has only good things to say about the wine.

"I was a bit unusual in that I latched on to sherry quite early in my wine drinking career," Liem says. "In the mid 90s when I was introduced to wine I was attracted to sherry simply because at the time I thought it tasted good."

On Sherryfest Liem says: "Sherry has entered the consciousness of wine consumers in a way that I’ve never seen in my lifetime. We wanted to host an event that captured this momentum."

Sherryfest was an enormous success and hosted top industry professionals, bodegas, sherry houses and consumers and treated them to tastings, educational seminars, dinner events and much more.

The sherry renaissance: something new in the wine market

To the regular consumer the ‘sherry revival’ seems to have come from nowhere but for wine connoisseurs the new sherry renaissance is all part of a continuous trend to look for something new in the wine market.

Both Liem and Greenbaum agree that the recent leaning towards sherry is due to bars and restaurants looking for sharper, non-fruit based flavours.

Greenbaum says: "It seems as though in general, a lot of people who sell booze in New York, and other cities are gravitating towards minerality and sharper flavours in wine and spirits, instead of oakier, richer, fruit driven wines, which were more popular in the last 20 years. Sherry is generally not about fruit in the way that other wine is."

Although the majority of new sherry bars are popping up in trendy cities, Liem claims that not everyone who enjoys sherry is a wine connoisseur. "I think it’s easy to say that sherry is really popular amongst knowledgeable wine consumers; people that are already very familiar with wine and have a high level of knowledge that seems to be the impression …but on the other hand here in New York I also see a lot of ordinary consumers drinking sherry."

Despite its current high status and trend factor its ominous history of being a favourite tipple of the blue rinse gang still lingers. Can sherry ever get rid of its bad reputation?

"To me sherry has already shed this image," claims Liem. "If you look at London there’s nowhere else in the world that has a more vibrant sherry drinking culture right now. It seems like there are new sherry bars opening every month."

Greenbaum agrees with Liem that it has shed its image but adds that the allure for young people is that it is an old fashioned drink as it "coincides with a general revival of drinking things that were historically popular."

He continues: "The old-fashioned cocktail is one of the most popular drinks now, and just as classic cocktails have seen a revival in the last 15 years, sherry can maybe see a similar rebirth."

Value for money: the affordable beverage

In these tough economic times a leading factor in sherry’s popularity has to be the fact that it is remarkably cheaper than wines of a similar calibre.

"Sherry is arguably the greatest value in the wine world," says Liem. "You have these incredibly old wines, even a basic fino or manzanilla is already an aged wine, and at every price point you have wines that are really over achieving in terms of quality."
The affordable beverage is also reaching consumers by being readily available in restaurants and bars, showing that, as Liem says, "the renaissance of sherry is being fuelled by restaurants."

Liem says that sherry pairs well with most dishes because of the "flor, which creates savory, umami flavours that complement and enhance many other flavours that we find in food."

Despite their love of sherry both Liem and Greenbaum are realistic about its place in society. Liem says: "Sherry is always going to be a niche item, sherry will never be the new chardonnay, but it doesn’t really have to be. I think that what’s nice now is that sherry is being made available to people who are interested in exploring it."