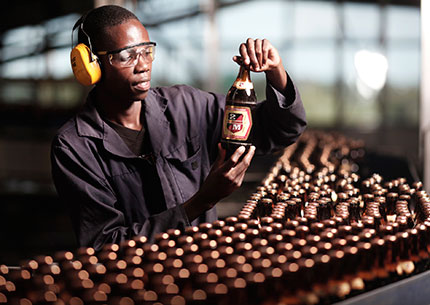 From cracking open a bottle before a match to ordering the ‘usual’ after work, a refreshing pint goes hand in hand with many of life’s little pleasures.

No one wants a bad-tasting drink so the right packaging is essential for keeping beer fresh. "Beer is a very complex product in terms of its packaging requirements," explains world-leading brewing company, SABMiller’s packaging consultant, Richard Corker. He adds packaging needs to prevent oxygen and light from getting in as both can affect quality and freshness, and CO2 from escaping to keep the fizz.

Coloured glass bottles are a popular choice for protecting beer but a lighter material, requiring less packaging would be better for the environment. Recyclable plastic could provide a happy medium between the consumer’s wish to swig from the bottle and improving sustainability, so scientists at Trinity College Dublin’s CRANN Institute and SABMiller are investigating how to keep plastic-bottled beer fresh for longer.

SABMiller want a plastic that can increase the shelf-life of beer from only a few weeks, up to six months, which is a tall order. "Gases fly through plastic without any problem at all and in the beer industry that’s going to be an issue because beer has got carbon dioxide in it and if you put beer into a plastic bottle the carbon dioxide will leak out, which kills the flavour," explains Ireland’s nanoscience CRANN Institute Professor, Jonathan Coleman.

Luckily, Coleman and his team are researching two-dimensional nanomaterials that do not allow gases to pass through them. If the nanomaterials, which are shaped like platelets or sheets of paper at the micro level, could be added to plastic beer bottles, it could potentially "slow down the gas molecules moving through the plastic by at least a factor of ten".

The two-year project, which started in October 2012, will not be without its challenges. Thanks to many years’ of alcohol advertising consumers instantly recognise different beer brands and make assumptions based on its packaging.

"The look of the plastic is the real issue here because when you put nanomaterials or anything inside a transparent plastic you can change the colour of it, which is no good because for marketing reasons beer bottles need to be transparent," says Coleman.

When the vast majority of nanomaterials are added to plastic, the plastic becomes black, absorbs all light or becomes strongly coloured. However, one of the nanomaterials that has been discovered doesn’t absorb any light and can be made in large quantities, which will be key for producing bottles for the mass beer market.

"In principle you could put that in a beer bottle and have it remain transparent but in practice there are a lot of technical details that need to be resolved before that works in the real world and that is what a lot of this project is about," Coleman explains.

Why would the beer industry want to swap from glass to plastic? As SABMiller explains on its website "companies need to take action to minimise both pre and post-consumer packaging waste. Packaging should be designed for optimum recycling/reuse and to have the lowest possible environment impact".

Plastic would be lighter to transport than glass, which would result in fuel and carbon dioxide savings.

"In the beer industry you’ve got a centralised production model with large breweries brewing and bottling beer. The beer is then shipped to the shops, which might be some distance away. You have trucks full of beer in glass bottles and the glass is heavy so that means the trucks have to use extra fuel just to move the glass around," says Coleman.

He adds that if a brewer ships a million bottles a day that would be a huge amount of glass so the savings made by switching to plastic would be "quite extensive". These cost savings in terms of fuel and materials could also be translated into lower prices for consumers.

SABMiller’s Corker points out the aim is "to create a bottle material, which will be fully recyclable as per current plastic bottle recycling processes". This means waste and damage to the environment will also be kept to a minimum even after the last drop.

Before the nanomaterial can be applied to the beer bottles found on supermarket shelves, Coleman and his team need to show that the material works. "We’re just at the start of this project so we haven’t solved this problem yet but we’re working on it," he says.

At the end of 2013 Coleman and his team will have to make a decision based on their findings as to whether the research is worth continuing for the full two years or not. If the project is a success, the next step will be to show that it can be done on an engineering scale with the same plastic that would be used for beer bottles and moulded into the right shape.

"It all takes time so it’s not as if you finish the research and then months later you’ve got plastic bottles on the shelves. There is a time lag and I couldn’t tell you how long that will be but it could be a number of years," says Coleman.

If the research is successful, however, he suggests that it could lead to a beer packaging revolution, similar to the switch soft drinks made from glass to plastic, so watch this space.