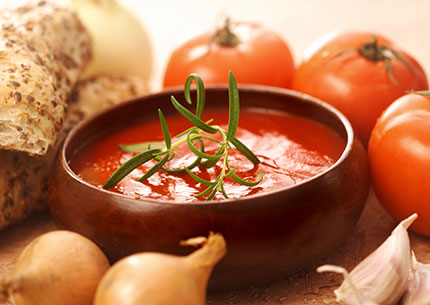 Whilst other aspects of the Mediterranean lifestyle have made their way around the world, gazpacho has largely been ignored in the UK. The chilled soup, which is usually tomato based, originated in Andalucía, Spain but is also enjoyed in neighbouring Portugal.

As the healthy lifestyle trend in the food and drinks industry look set to stay, innovative beverage renegades have begun marketing new, RTD gazpacho drinks. Brands such as Cho and Pierre Martinet have revamped the soup’s image with new exciting flavours and quirky designs. The drinks are aimed at health conscious consumers who are looking to try a new spin on an old classic.

We catch up with the brands at the centre of this emerging trend to ask them about the gazpacho revolution, their innovative flavours and how they aim to please both the gazpacho purists and the newcomers.

The recent backlash against the levels of sugar in apparently healthy fruit juices and smoothies has allowed a market to open up for gazpacho and other vegetable smoothies. The simplistic nature of the product and the ingredients involved alone sell the overall health appeal of the drink; a quality that many brands with gazpacho ranges are using for their own benefit.

Food manufacturers Pierre Martinet recently diversified its long standing salad business to include a range of RTD gazpacho and vegetable smoothies in France. The company is also in the process of releasing a range for the UK market in the second quarter of 2014 with the help of marketing agency Echo Partners. Co-founder of Echo Partners, Dominic Maxwell, agrees that the concern over sugar levels in fruit juices and smoothies could work in their favour. He says "I had a chat with a few buyers before Christmas so there’s definitely a level of interest in a healthy smoothie drink with far reduced sugar compared to your traditional fruit smoothie product."

The gazpacho trend is also in line with the recent government health campaign Smart Swaps which urges consumers to trade unhealthy products for healthier alternatives to cut down on sugar levels and saturated fat in our diets.

Cho, a new brand to the market who recently launched a range of gazpacho drinks, claim their range is in line with consumer concerns about levels of sugar in the beverages as co-founder, Adam Baker, explains: "The idea is to do something which is good for you without being worthy. You shouldn’t have to pinch your nose to drink it; it should be good fun and good for you at the same time."

Seeing that there were very few vegetable drinks on the market, Cho set about making a new kind of savoury beverage. "We’re quite massive foodies and at some point in time I looked at [gazpacho] and thought ‘if that was longer and more refreshing it would make a brilliant drink’; why aren’t there savoury drinks," says Baker.

Many hail the rise in the popularity of gazpacho to a change in attitudes towards Spanish cuisine with many young Spanish chefs taking more old fashioned dishes such as gazpacho and reworking them for a modern audience. This may involve serving the dish as an amuse bouche or even a palate cleanser between meals.

Many chefs have thrown in new exotic flavours such as watermelon and strawberry to challenge diners’ taste buds. This is a theme that can also be seen in the latest offering of on-the-go drinks and both Pierre Martinet and Cho worked with Michelin-star chefs to perfect their recipes.

While consumers can choose to try gazpacho drinks more in line with traditional gazpacho recipes, that contain tomatoes, peppers, onions, olive oil, and bread, there are also some wilder flavours such as beetroot and apple, carrot or even tomato and strawberry gazpacho.

Both companies focused heavily on utilising an eye catching, trendy design to draw in consumers. Pierre Martinet utilised strong colours to appeal to parents who might buy them for their children, while Cho used traditional Spanish imagery with a quirky redesign to remind consumers that its gazpacho was a modern twist on traditional recipes.

Gazpacho has come a long way from its humble beginnings in the mountains of Andalucía. How much further it will go depends on the drinks industry’s desire to push new taste boundaries and consumers willingness to explore new sensations in the name of health.