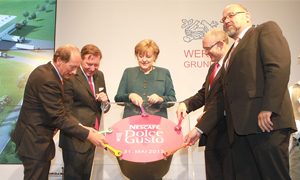 Nestlé has begun construction on the new Nescafé Dolce Gusto manufacturing facility in Schwerin in the state of Mecklenburg-Vorpommern, Germany.

The facility is being built with a total investment of €220m, the largest investment made by the company in Germany.

The Schwerin factory will be the company’s third Nescafé Dolce Gusto site, after Tutbury in the UK and Girona in Spain.

Located around 100km from Europe’s biggest coffee imports port – Hamburg, the new factory will have 12 production lines and will produce around two billion capsules a year for export to Germany, Eastern Europe and other Scandinavian markets.

"We are convinced that growth is possible. This is why we are not only investing right now, but continuously, in the European market and in convincing innovations, modern technology, and highly qualified employees," Bulcke added.

"This factory is not only our biggest investment in Germany, but one of our biggest-ever investments in Europe.

"It reflects our long-standing commitment to Germany and illustrates our deep trust in a country where we have had successful operations for 110 years."

The Schwerin factory is expected to be operational by the end of 2013.