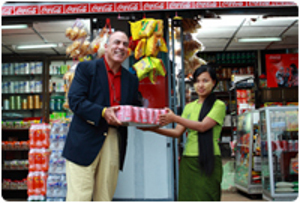 The Coca-Cola Company has shipped drinks to customers in Yangon, Myanmar for the first time in more than 60 years, following the lifting of US sanctions against the country.

The beverage giant has also launched an outdoor advertising based on the global theme of ‘Open Happiness’ all across Yangon.

Coca-Cola’s relation with Myanmar started in June 2012, when The Coca-Cola Foundation granted a sum of $3m to Pact, a non-governmental organization, to support women’s economic empowerment and job creation throughout the country under a program called WORTH.

Among the projects include a Coca-Cola bottling facility in Myanmar and a distribution agreement with local soft drinks company Pinya Manufacturing.

The collaboration intends to bring Coca-Cola’s global system business practices to Myanmar and use the existing local business talent to make its products available all across the country soon.

Coca-Cola CEO and chairman Muhtar Kent said the company has been a part of the community fabric in countries around the world for decades.

"In every nation and city where we do business, our employees strive to create economic value and build sustainable communities," Kent added.

"We are privileged to once again have the opportunity to play a role in building a better future with the people of Myanmar."

Coca-Cola intends to follow and adhere to its well-established global standards of corporate ethics including global human and workplace rights policy, supplier guiding principles, code of business conduct and anti-bribery policies, for all its activities in Myanmar.