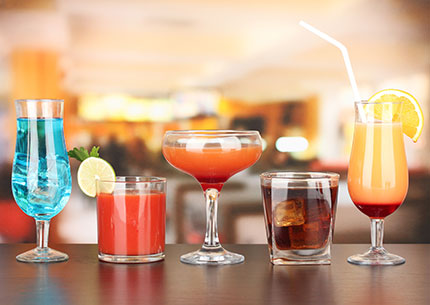 You could be forgiven for thinking The Brink in Liverpool city centre was just like any other café-bar. People come here to eat, drink, watch football and listen to DJs with friends most nights of the week. The only difference is: they can’t buy any alcohol.

"The Brink is a social enterprise run by the Action on Addiction treatment centre," explains venue manager, Carl Bell. "It was set up as a place for people in recovery to come and have fun in a safe environment but it’s open to everyone.

"We have DJ nights, live bands, quiz nights, film nights, football screenings, speakers from the Tate Gallery – everything you’d get at a ‘normal’ bar except the alcohol."

Stunning range: from mocktails to smoothies

As you may expect of an evening venue (they are open in the daytime too) that doesn’t serve alcohol, the range of non-alcoholic drink options at The Brink is staggering. Customers can choose from a menu encompassing over 100 hot and cold drinks including high quality teas and coffees, soft drinks, cordials, juices, presses, smoothies and mocktails.

"We don’t try and make our drinks look like alcoholic drinks we try and make them look attractive in their own right using different glasses," says Carl. "There’s lots of cold drinks on offer ranging from 30p to £2.99 but by far the most popular drink is coffee. We do all sorts of variations from mocha to cappuccino to espresso but everything is made using freshly ground beans. We make all our own food too, even the bread."

It isn’t just the range of non-alcoholic drinks and homemade cooking that has attracted an eclectic mixture of people, families and even royalty through the doors since The Brink opened in September 2011.

"The atmosphere is brilliant," says Carl. "I was in here last week on my night off. It was a dance event and there must have been 150 people here dancing and having a good time. It’s a safe environment where you don’t feel under any pressure to drink. I don’t think there’s been a single fight since it opened.

"We get all sorts of people in here. I’d say about 50% was from the treatment centre and everyone else is either families or people coming for the food or the entertainment. We’ve even had a royal visit – Kate Middleton dropped in when she was up in Liverpool in 2012 and we now have a cocktail named after her!"

The future: expanding across the country

The Brink has recently launched a Benevolent Brinkster scheme, which allows customers to pay for drinks they don’t want and leave them behind the bar for some of the less affluent visitors. It is this kind of innovation that has seen them inundated with pleas for help from around the country.

"We hosted a stall at the Recovery Festival in London in March," says Carl. "Iain Duncan Smith spoke about us for about five minutes during his speech, Russell Brand had his photo taken with our staff and now follows us on Twitter and Mitch Winehouse spoke to us at length.

"Everyone who came up wanted to know what we do and how it works. We’ve had so many enquiries generally we’ve organised workshops to help people who want to set up similar enterprises in their own cities. I don’t think it’ll be long before you see these sorts of non-alcoholic bars springing up all over the place."

However, you don’t have to be exclusive to make a success of selling non-alcoholic drinks. In London, contemporary Japanese restaurant and cocktail lounge Wabi sells an innovative range of alcohol-free creations such as Firefly and Apple and Ginger Smash, which they match to the dishes on their tasting menu as though they were wines or cocktails.

"Our exploration of non-alcoholic drinks came almost by accident," explains bar manager Allan Farrell. "One night a customer didn’t want to drink alcohol and asked for something non-alcoholic that would complement the dishes they’d chosen from the tasting menu. We got them one of our non-alcoholic cocktails that we thought would best suit the food but since then we’ve really taken the idea on.

"After a period of testing and trying out different things, we’ve created a range of non-alcoholic drinks that we know go well with certain foods. Now our waiters actively sell specific non-alcoholic drinks to go with certain dishes from the tasting menu. For example, if you’re having tempura you will want something like a Temple Garden, which has acidity to cut through but not overpower the chef’s flavours."

Expanding the range of drinks

Constantly experimenting with new flavours, Allan and his team are looking to expand the range of drinks in their repertoire to satisfy the growing demands of their customers.

"I’d like to explore more herbaceous flavours as I think it will be easy to pair them with savoury dishes like sushi," he says. "It’s not that non-alcoholic drinks are taking over from alcohol; they’re just offering an alternative. People don’t want to drink beer or wine on every night out, especially if they’re going for an event dining experience. Like every restaurant, we still serve a lot of alcohol and water but we always try and recommend something a bit more unique."