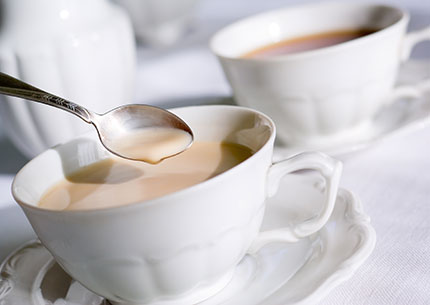 "Tea is the most widely consumed beverage in the world next to water, and can be found in almost 80% of all U.S. households."
This, from the Tea Association of the USA, is especially interesting considering America’s history with tea andtheir age-old passion for coffee. However, just before Starbucks acquired speciality tea retailer, Teavana, in December 2012 for a mere $620 million,CEO Howard Schultz told The Wall Street Journal: "We will do for tea what we did for coffee."

In the US and elsewhere, there seems to be a growing curiosity in tea, particularly speciality tea, and greater experimentation with tea leaves in all their exciting and exotic flavours.

The experts agree. Professional tea taster, Kevin Gascoyne, and TWG Tea co-founder and director of business development and communications, Maranda Barnes, believe that speciality tea is becoming increasingly popular, not just in the US but all around the world.

"I had it in my bottle when I was weaned. We start pretty early and we drink it solidly."

Such a statement might set off alarm bells if it was not put into context; the speaker being Yorkshire-born Kevin Gascoyne, reminiscing about his history with tea.

It was in his teenage years that Kevin began his journey with single estate Darjeeling, which has since taken him to Asia every spring for the past 20 years. Now, Kevin is one of four tea tasters and owners of specialist tea company, Camellia Sinensis, based in Montreal, Canada. Camellia Sinensis boasts two tea schools, a catalogue of 250 rare teas and best-seller, ‘Thé: Histoire Terroir Saveur’, used as the standard text for the Canadian Tea Sommelier Program.

Kevin firmly believes that speciality tea is becoming more popular around the world, especially in the US, where tea is "a comparatively virgin market". "When you look at markets like China and India where everybody drinks tea, the potential in North America is just enormous," he says.

However, even in Asia, the market share for "exquisite yet trend-setting teas" is rapidly increasing, particularly in Hong Kong and China, states Maranda. She says that natives are "moving towards an appreciation of their own heritage products," and"there will be a growing interest in the rarer and superior quality teas as well as trend setting tea blends in Asia".

TWG Tea was originally established in Singapore in 2008. Since then, TWG Tea has developed a tea list of over 800 different single estate fine harvests and exclusive brands – the largest in the world – and now has eight locations in Singapore and nineteen elsewhere in the world.

Camellia Sinensis and TWG Tea may be two very different brands with unique histories but what they do have in common is their success in rare and luxury tea which they attribute to their dedication to finding fine teas at their source.

Kevin explains why Camellia Sinensis’ catalogue has become known for its level of quality: "We have a catalogue of 250 of our own rare and collectible teas and everything is bought directly from the grower and fresh from the season… While we’re there, we’re picking up information on how it’s made, taking nice pictures, talking to the growers and understanding subtle details of manufacture and garden practise." It’s this experience that gave Kevin and his partners the advantage when putting together their book, which is currently being translated for Korea, China and Russia.

Similarly, TWG Tea offers fine teas directly from their source and has subsequently developed strong relationships with tea growers worldwide. Maranda offers another reason for their success: "TWG Tea also takes pride in shaping its aesthetic image of all our teas, accessories and gourmet food items, offering a totally distinctive experience to our customers." TWG Tea is involved in tea gastronomy, having integrated signature teas into savoury recipes, and desserts, such as the Moroccan Mint Tea macaron, Earl Grey Fortune and Chocolate macaron and tea-infused chocolate.

Kevin gives several reasons as to why tea, especially in the US, is "ready to explode". One such reason is the increasing interest in healthy living. "The reason people have been drinking it for 5,000 years and it’s the world’s number one drink is because it has this natural, symbiotic relationship with the human system."

Another advantage is its low cost. "You can have this massive diversity of flavour experiences with a world class product, even if you’re drinking the most expensive teas in the world or the most rare teas in the world, and it’s not costing you much more than regular wine per litre."

Foodies are also responsible for this growth, says Kevin. "Once you get into more high-end, obscure teas, the story behind the tea is more important, people have a more ‘foodie style’ approach…Tea is really connecting with this increased interestfor a flavour experience with a good story."

Maranda also believes in the importance of a story behind the leaf.Thus, TWG Tea developed an Haute Couture Tea collection of seasonal tea blends. "There is a story to tell each season and we want to bring couture into tea. Our intent is to capture the spirit of what’s happening around us and introduce the pleasures of tea in a new, delightful and infinitely stylish way," she says.

In preparing for the growth ahead, Maranda offers her expert opinion: "The ever changing tastes of tea drinkers means that we need to continually delve deeper into unchartered territories, seeking special conditions, rare species, harvests and more imaginative combinations of varieties that have never been explored. This relentless quest means fruitful contact with tea planters and allowing TWG Tea to discover more wonderful teas, as well as devise new teas."

Considering other market leaders who are inspiring the industry, Kevin mentions David Segalof Davids Tea who has "taken it to another level". Kevin believes that the "very typical Asian angle to tea" does not really connect with the North American public. Rather, Davids Tea offers a "North American version" to speciality tea which he thinks we will soon see from Teavana too.

Kevin is not threatened by the recent competition. "The market place is so untouched, there’s going to be clients for everybody…It’san enormous pool of possibility and, of all the people that start drinking tea at Teavana, I’m always going to benefit from a small percentage that wantto drink rare and collectibles…The potential is massive, these guys have seen it. The timing is perfect."