The taste for coffee is developing fast in Mexico. The Central American country is not among the main consumers per capita of the hot drink, but consumption is growing rapidly, especially in the on-trade channel. Coffee shops are capitalising this growing appetite for the drink, and sales in coffee and tea shops will grow 4.1% compound annual growth rate (CAGR) until 2021.

This trend is especially remarkable among consumers between 20 and 45 years old, and women. According to GlobalData’s 2016 Foodservice survey, 61% of consumers in the 25-34 age bracket visit a coffee shop more than once a week, and 55% of coffee shop visitors are women.

Coffee shop operators are tapping into this growth opportunity with intense expansion. Starbucks, the market leader, plans to open between 50 and 55 new outlets every year until 2018. The popular brand had 520 outlets in the country at the beginning 2016 and this figure had increased to 600 by March 2017. Recent calls for a boycott to American products do not seem to be affecting Starbucks’ growth in Mexico.

Other operators are also entering the market, such as the Canadian coffee shop Tim Hortons, which has recently announced plans to open in Mexico. Nestle, which opened its first coffee shop in 2016, now has ten coffee shops inside Mexican educational institutions serving 20,000 students, and plans to expand this coverage with 60 more outlets in order to serve 100,000 students. The company is also studying other business models, such as franchises or coffee trucks, which are already being piloted.

With one coffee or tea shop for every 10,000 people, the Mexican coffee shop market is still far from saturated and offers a sizeable opportunity. 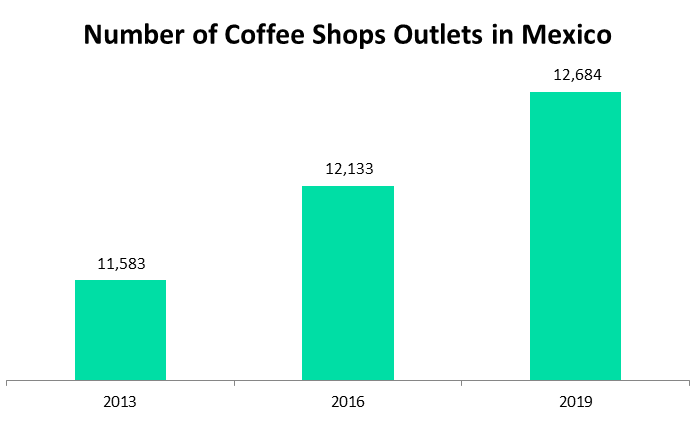