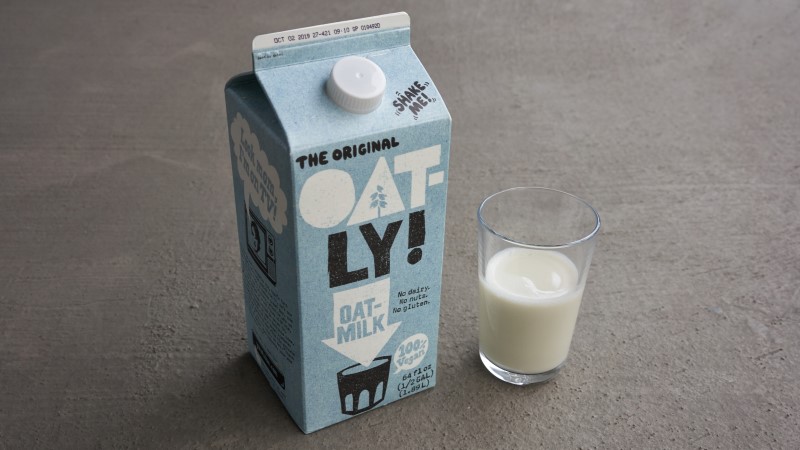 Oatly has become one of the most successful alternative milk companies globally. Credit: Tada Images / Shutterstock.

Dairy-free drink giant Oatly is the latest food company to suffer from problems across its supply chain and production, leading to a tumble in its share price.

Oatly’s shares tumbled by more than 20% following Monday’s third quarter update, leaving them at just over $9 each, compared to $17 when the company floated. The share price fell upon news that Oatly had slashed its sales outlook for the year to $635m, $55m lower than it had previously forecast.

The revised revenue outlook came as a result of a combination of factors. These included an increase in the cost of production, supply chain problems and slower than expected growth in some markets.

Lower than expected production output at its facility in Ogden, Utah, US, due to temporary mechanical and automation issues in late August impacted revenue by approximately $3m, while foodservice location closures in Asia due to the Covid-19 Delta variant cost around $3m. The ongoing truck driver shortage in the UK also delayed the distribution of products, impacting revenue by an estimated $1m.

The company has stated, “We believe this is primarily a timing issue and in the first half of 2022, we expect to have an increased share of shelf space at retail given our strong velocities and current supply levels.”

Disruptions are an industry-wide trend

Issues regarding food security have reached new heights during the Covid-19 outbreak, largely as a result of labour shortages and supply chain disruptions resulting from pandemic related restrictions. This has caused global food prices to increase by 31.1% Y-o-Y in October 2021, according to the UN Food and Agriculture Organization (FAO).

International border and travel restrictions have greatly hindered the movement of seasonal workers, upon which the agricultural sector, in particular, is reliant. It is estimated that in the UK alone, the coronavirus outbreak has meant that between 70,000 and 80,000 overseas seasonal workers have not been able to enter the country.

Supply chains have also been disrupted in many countries due to the adoption of social distancing measures and quarantine requirements. For instance, in the US, 20 major slaughterhouses had been forced to shut by May 2020, leading to more than two million animals being culled.

Oatly has had an impressive journey from being the first manufacturer to commercialise oat milk to becoming one of the most successful alternative milk companies globally. Shares in Oatly closed at $20.20 on their first day of trading (May 20, 2021), above the $17-a-share at which the company had set its IPO. At lunchtime, New York time the same day, Oatly’s shares had risen to $22.44.

In its financial year ended on December 31, 2020, Oatly posted revenues of $421.4m, an increase of more than 100% on the previous 12 months, but recorded a loss of $60.4m due to investments in production and new markets, according to the IPO prospectus.