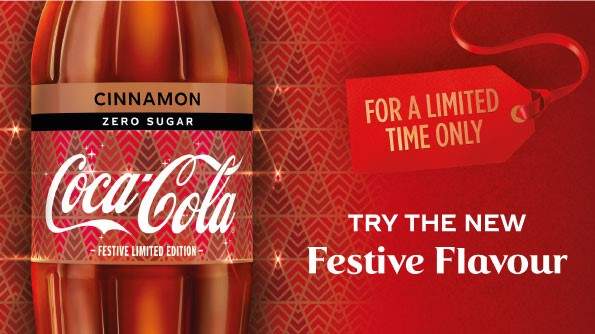 Following a long awaited relief from a blistering summer, it seems consumers are more than ready to throw themselves into the festive season.

As Coca-Cola kicks off the Christmas festivities with a new, limited edition launch of Coca-Cola Zero Sugar Cinnamon, GlobalData takes a look at the most eye-catching seasonal launches and analyses which are likely perform best.

Christmas is a time of tradition, and while every family has their own, for many the beginning of the season is marked by festive marketing and launches from Coca-Cola. This year, the brand is chasing a seasonal, sugar-free boost in sales by offering consumers a new cinnamon-flavoured variant.

Launched in a 1.25 litre PET bottle and dressed in the traditional red and gold design, the new flavour will be joining the tax-exempt Zero Sugar portfolio for a limited time only. Unsurprisingly, the new launch is already creating a buzz among health conscious consumers looking to indulge over the Christmas period.

In 2017, Coca-Cola Zero Sugar demonstrated the highest incremental growth among Coca-Cola variants in the UK. As a result of the health trend, consumers have opted for the variant as it retains the traditional taste despite its zero sugar attribute, and Coca-Cola hopes to maintain this positive trend through the exclusivity of this new flavour to the Zero Sugar portfolio.

Although Coca-Cola remains at the heart of a consumerist Christmas, other companies have jumped on the bandwagon. Not only has Starbucks managed to decorate its menu with Christmas flavours, it has also carved out an autumnal selection that is hugely popular among consumers – but stock issues mean this popularity could be its own undoing.

Fan-favourite Pumpkin Spiced Latte made its return in September and was also available as a vegan-friendly option. In anticipation of the increasing array of seasonal coffee launches from other chains, such as Costa Coffee, the autumn favourite was offered to My Starbucks Rewards (MSR) customers as early as August.

Starbucks claims to have sold over 200 million cups of the latte variant since its 2003 launch and this year, according to a recent article from Huffpost, many of its cafes across the UK are already running low on the beverage, with many consumers taking to Twitter to express their outrage.

In response, Starbucks has directed consumers to its other autumnal launches, such as its Maple Coffee Frappucino and Maple Latte, but these potentially lost sales could be a big blow as rival chains look to spice up their own seasonal line-ups.

As one of Starbucks’ main competitors, Costa Coffee followed behind in an attempt to draw consumers in with its new seasonal Bonfire Spiced flavour, available as a latte, hot chocolate or cold-brewed coffee. The new offering oozes autumnal vibes with “notes of rich caramel toffee with smoky, toasted spices topped with crunchy caramel vermicelli”.

The season continues to be the most important in terms of hot drinks sales. According to GlobalData, Q4 remains the market’s key quarter in the UK having achieved the highest incremental growth for hot drinks year on year since 2014.

The launch of this new beverage pits the two major coffee chains head-to-head this season. While Costa Coffee is firmly on the media radar thanks to its acquisition by Coca-Cola, it will be interesting to see how it fares in the short term against Starbucks.

Coca-Cola further demonstrated its seasonal marketing experience with the introduction of new, limited edition Fanta flavours. The brand’s ‘flavour election’ campaign, launched in April, gave consumers the opportunity to vote for their favourite from a selection of four new flavours. Pink grapefruit and blood orange won the vote and were launched in time for Halloween.


As with the Coca-Cola Zero Sugar Cinnamon launch, these new Fanta flavours are offered exclusively as zero sugar, zero calorie variants. According to a Coca-Cola representative, the seasonal launch was made in response to the 23% growth of Fanta during Halloween in 2017, with more consumers opting for Fanta Zero than ever before.


The new editions feature Halloween themed pack graphics, as well as a code consumers can use to unlock Halloween-themed Snapchat filters that aim to encourage repeat purchases.

Seasonal launches all have one thing in common and that is their indulgent appeal. While many brands are keen to highlight their premium image and ingredients, others offer consumers a chance to treat themselves to new taste experiences. The limited edition J2O Glitterberry launch is a prime example of both.

The seasonal favourite returns this year having taken the market by storm in 2017 by becoming the third-highest selling adult soft drink during Christmas, according to brand owner Britvic. The beverage contains everything festive and indulgent with a blend of grape, cherry and winter spices and even a touch of edible gold glitter. Available in glass bottles, the seasonal favourite remains a perfect, premium option for those taking a few steps back from a boozy Christmas.


In response to the success seen in previous year, the brand was launched earlier this season. The September launch was reportedly an effort to “help retailers make the most of sales opportunities [and] key occasions”, according to Britvic’s Phil Sanders, but with the safety net of the warmer weather now gone, this might instead be a move to arrest the brand’s rapidly sliding consumption volumes.

Britvic was keen to maintain consumer attention during the season with the launch of its new Robinsons Fruit Cordials Winter Edition. Released at the beginning of October, the new crushed apple and cinnamon variant continues the brand’s foray into the premium cordial arena, and will prolong its exposure to the UK’s booming adult soft drinks segment, which has doubled in volume in the last four years alone.

The new edition, which Britvic claims is “a sophisticated twist to squash”, is available in a 50cl glass bottle and priced at £2.49. The drink can be enjoyed both hot and cold, making it a perfect winter warmer for families.

Back by popular demand, Rubis Chocolate Wine is expected to hit Aldi shelves in mid-November. The fortified Spanish wine, made from Tempranillo grapes and premium chocolate flavouring, will be offered in 50cl bottles and priced at £9.99. The launch comes despite a 6.4 percentage point drop in seasonal wine purchases in the UK in 2017, according to a report by GlobalData Retail. However, other alcoholic drinks, such as champagne, had fared better during the festive period as a result of price promotions. Therefore, this combination of price and enticing flavour is likely to result in another successful year for the product.

Described as “deliciously decadent”, the wine also follows the premiumisation trend with its indulgent image that consumers seek during the Christmas period, providing another likely platform for sales growth.