Cold-brew coffee is produced by steeping fresh ground coffee in cold water for anywhere from 12 to 48 hours, without heat. This makes cold-brew coffee considerably different to iced coffee, which uses heat to double brew the coffee so it maintains its flavour when chilled with ice.

Since the brewing process does not require heat, the resulting drink has a smoother taste with up to 70% less acid, yet it still packs a bitter kick that is often associated with iced coffee. The smoother taste of cold-brew coffee often reduces the need for creamers, sugar, or sweeteners while the cold-brew process extracts less caffeine from coffee beans. These two factors combined explain why many perceive cold-brew to be a healthier alternative to traditional coffee. 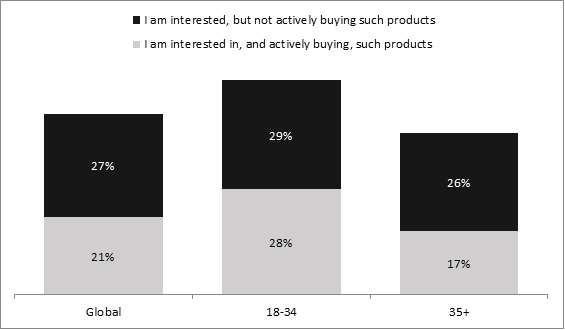 Given cold-brew’s unique taste profile and perceived health benefits, 21% of consumers globally say they are interested and already purchasing beverages with cold-brew claims, while a further 27% express an interest in cold-brew but are not yet actively buying such products.

In particular, younger consumers aged between 18 and 34 are more interested in cold-brew, with 28% globally interested and actively buying such products. This is 11 percentage points higher than those aged 35 and over. Health and fitness is a high priority for younger consumers, so the potential health benefits of cold-brew coffee are likely to be a key motivator for purchase among this cohort.

Consequences of the craft beer boom

The craft beer boom, which is primarily driven by younger consumers, is having spill-over effects on other industries, including the coffee sector. A number of consumers are now seeking more premium and indulgent soft drinks which demonstrate quality, authenticity, and artisanal production methods. The fact that cold-brew coffee has been around for hundreds of years may heighten the appeal of the beverage among younger consumers driving the craft movement.

While the unique processing methods and sensory aspect of cold-brew may encourage younger consumers to experiment with the beverage, cold-brew coffee’s smoother, less acidic taste may also resonate with older consumers who may prefer milder flavours and less caffeinated products.