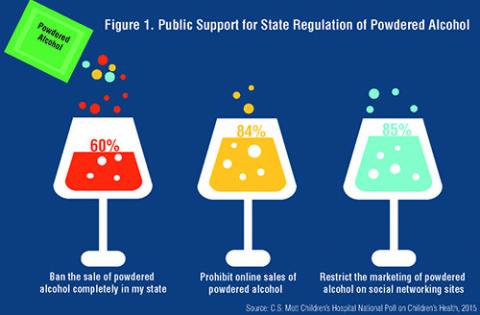 A survey by the University of Michigan has revealed that 90% of adults are concerned about the misuse of powdered alcohol among children and youngsters and around 60% favour a complete ban in their states.

The poll conducted by the University of Michigan CS Mott Children’s Hospital National Poll on Children’s Health follows the legalization of powered alcohol in the US this year.

The poll also revealed that around 84% of the people surveyed support a ban on the online sales of the product and 85% believe that marketing of ‘Palcohol’ should be restricted from social networking sites to limit the access of the younger crowds to the product.

National poll director Dr Matthew Davis said: "The product’s makers tout powdered alcohol as improving convenience for people who enjoy the outdoors and others who want to travel light with alcoholic beverages.

"Given that several states are considering legislation about powdered alcohol, our poll looked at what the public thinks about this new product. The majority of adults agree that powdered alcohol may spell trouble for young people."

States including Louisiana, South Carolina, and Vermont have already banned the product and Michigan and New York are also considering the move.

In Michigan, State Senator Rick Jones has introduced legislation banning the sale and use of powdered alcohol in the state. The Senate passed the bill unanimously and a corresponding bill in the Michigan House is now under consideration by the Committee on Regulatory Reform.

A debate regarding the product will be conducted before the House’s regulatory reform committee this week.

Image: Louisiana, South Carolina, and Vermont have already banned the powered alcohol. Photo: courtesy of Regents of the University of Michigan.