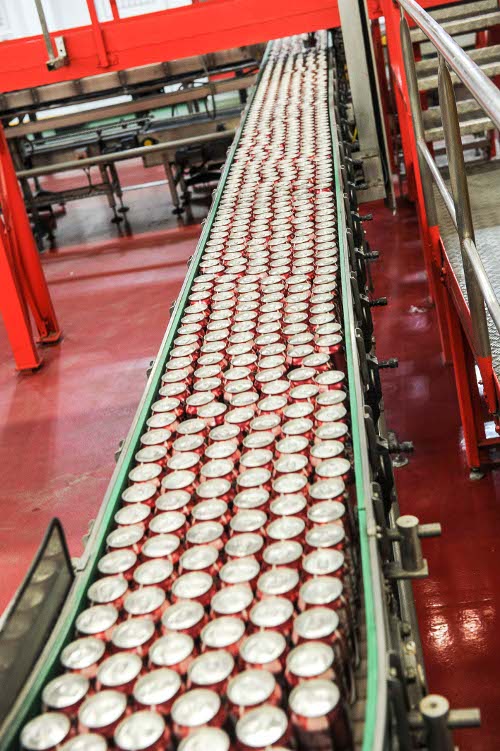 Coca Cola Enterprises (CCE) has deployed Seimens automation technology – Optimized Packaging Line (OPL) – to increase the production efficiency at its Sidcup facility in Kent and meet the demand during the upcoming sporting event in the UK.

The new KHS canning line with capacity of 120.000 cph will help CCE’s Sidcup facility increase its production capacity by another 20 million cases per annum.

Sidcup initially plans to use the line to produce 150ml and 330ml cans and later for 500ml cans.

CCE European electrical and automation manager Noel Corry said after they analysed the installed base they came to the conclusion that a standardised approach could help them in many areas such as cost reduction, training and maintenance needs, spare parts and efficiency gains.

"Coinciding with the need to increase capacity, the move to a standardised approach and the implementation of Siemens’ OPL concept will, I believe, deliver real benefit in the future," Corry added.

Siemens graphic designer Mat Campbell said OPL and standardisation are highly beneficial for production sites as CCE is finding out.

"With all the elements of the line networked together it is much simpler to implement changes and respond to market needs," he said.

"Add reduced line downtime as intuitive diagnostics deliver proactive maintenance support to ensure problems can be addressed before they become critical, as well as the time and cost savings inherent as part of a repeated engineering and operating philosophy that mean staff do not have to learn various operating procedures for several machines, and the benefits of such a strategy are clearly evident."

Under the agreement signed in 2011, Siemens and CCE are working to implement this strategic approach in all its facilities across the Europe.

Image: The new KHS canning line is one among the five canning lines supplied by KHS to CCE Europe during the last three years. Photo: Seimens