When cider appears on menus in Rio, you know you are on to a developing trend. Creating a new drinking culture takes time, but there are good indications in the emerging economies that the long-term forecast is for continued cider growth. 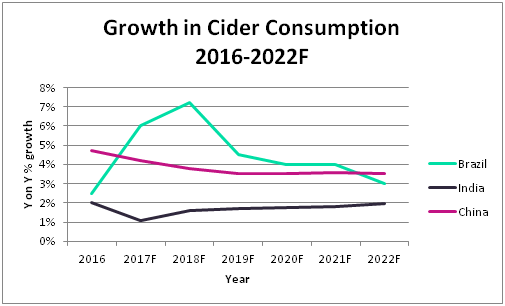 Cider brands such as Cereser (CRS Brands) started to appear on menus in Rio de Janeiro in late 2016 and are a popular drink marketed for celebrations and special occasions. CRS produces a whole portfolio of ciders, adding exciting new flavours (such as strawberry, peach and grape), as well as offering no sugar, zero calorie and non-alcoholic options. Clever packaging replicates the design of famous football team shirts, giving novelty appeal, which appeals especially to young millenniums.

In China, cider is also attracting a younger generation and female consumers, as it is considered a natural product with health benefits. Apple flavour products already have plenty of fans in terms of soft drinks, so the market exists for developing alcoholic options. Stronger branding and emphasis on premium quality could be a way to enhance category awareness in the country.

Cider consumption is not significant in India, although there are some new players in selected channels and some imports. Difficulties with distribution and no stable shelf space are obstacles to overcome, if brands like Somersby (Carlsberg) are to reach a wider audience. Interestingly India’s number one selling beer brand Kingfisher (United Breweries), was the inspiration behind new Peacock cider launched in the UK to accompany Asian foods.

Overall GlobalData forecasts Brazil, China and India are all set to see continued year on year growth over the next five years.