The USA gave birth to coffee culture as we know it, in films the police are always ‘grabbing a coffee’, and in New York, where coffee was first introduced to America, seldom is someone seen without one, but why is the beverage now in decline? 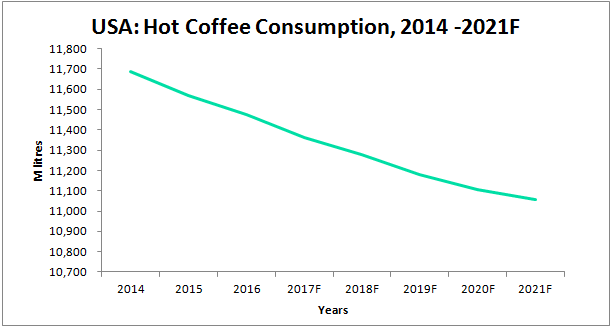 Despite this slowdown in growth there is a growing popularity for artisanal coffee, or products such as cappuccinos or espressos. In short, it seems that millennials have begun to choose quality over quantity sparking a slide in market volumes. The origin of the beans and where and how they have been roasted has become a focus for many consumers now taking a real interest in the taste of their cup of Joe. In-home coffee pod machines are also becoming increasingly popular as they are now more affordable, further enhancing the quality over quantity trend.

To counter this, coffee shops chains such as Starbucks have started to diversify their offerings with Teavana teas and a new affogato style dessert, where espresso is poured over ice cream. Starbucks is also looking to open more roasteries in 2017 and 2018, as it has already done in Seattle, aimed at high income coffee drinkers.

A consumer analyst for GlobalData says ‘this taste for premium coffee is very much expected to continue. The recent coffee commodity price hikes that have been seen in the market may, however, slowly start to affect the affordability of the beverage many consumers take for granted’.