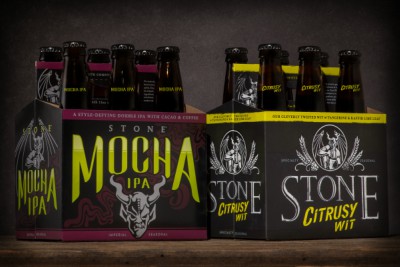 Stone Brewing has released its two beers; Stone Citrusy Wit and Stone Mocha IPA in the US.

The products are available in 12oz six-packs and on draft at bars, restaurants and retailers where Stone beer is sold.

"This is the first time we’ve released a Belgian-style witbier for our fans nationwide."

Stone Brewing brewmaster Mitch Steele said: "This is the first time we’ve released a Belgian-style witbier for our fans nationwide."

To be available through September, Stone Citrusy Wit can be consumed when stored at 55°F or lower for up to one year from the date it has been bottled.

Commenting on Stone Citrusy Wit Steele, Steele said: "We set out to create something very flavourful and refreshing for the summer months, set on creating a more innovative wit. First, we played around with tangerine and then the team landed on kaffir lime leaf to help punch it up even more with an intense citrus fruit flavour, all complemented by the beer’s subtle coriander spice character."

Stone Mocha IPA will also be available through September and can be consumed within the 120-day ‘enjoy by’ date printed on the bottle.

Commenting on the Stone Mocha IPA, Steele added: "This double IPA pours deep gold but has the deceivingly rich flavours of a stout. I’ve had countless amazing coffee IPAs and chocolate IPAs but this mocha blend really balances the bold hop qualities created by Cascade, Citra and Amarillo with rich cocoa and prevalent coffee traits."