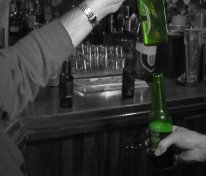 A new research carried out by scientists at the Universidad Carlos III de Madrid (UC3M) has revealed the science behind the beer’s rapid transformation from liquid to foamy state upon impact.

The study was carried out by scientists at UC3M’s Department of Thermal and Fluids Engineering, in collaboration with the Institute Jean le Rond D’Alembert and the Université Pierre et Marie Curie in France.

The idea to come up with a study came when one of the researchers observed the formation and spilling of foam, when one bottle’s base was hit by other bottle’s neck.

UC3M Department of Thermal and Fluids Engineering professor Javier Rodríguez said they all began to propose hypotheses and theories about the cause of the phenomenon, but none of them convinced them, so they decided to take it to the laboratory to do research using controlled experiments in well-defined conditions to analyse which physical phenomena are behind the appearance of that foam.

The study found that upon impact, expansion and compression waves appeared first in the beer bottle, causing the gas bubbles to move down and burst at the bottom of the bottle.

Upon bursting, the gas bubbles form small balls of foam, which due to low weight than the surrounding liquid, moved to the surface of the bottle, resulting in spillage and imitating an explosion.

Rodríguez said those clouds of foam are very much like the mushroom cloud caused by a nuclear explosion.

The foam formed at the bottom of the bottle is the result of more carbon dioxide (CO2) than the water in the bottle.

"But the chain of events set off by the blow to the bottle multiplies the escape of gas by a very high factor: a bottle may lose in seconds the same amount of gas that it would normally lose in hours if we simply left the bottle open on the table," Rodríguez added.

According to researchers, the study can be applied in the area of naval engineering or in studies related to the prediction of gases in volcanic eruptions.