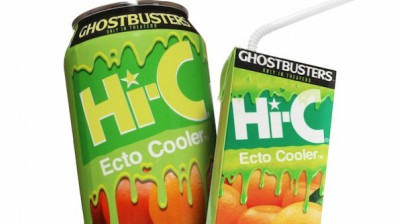 The Coca Cola Company is relaunching Hi-C Ecto Cooler, a green citrus juice drink, in May after a 15-year hiatus.

Hi-C Ecto Cooler debuted in 1987 through a promotional tie-in with blockbuster franchise Ghostbusters.

The drink will be relaunched on 30 May ahead of the release of the movie’s remake.

“The drink was re-introduced after social media fan groups, fueled by lobbying support from Sony Pictures, clamoured for a comeback.”

The company stated that although intially Hi-C Ecto Cooler was planned as promotional beverage for short term, its popularity kept it around for more than a decade.

The drink was re-introduced after social media fan groups, fueled by lobbying support from Sony Pictures, clamoured for a comeback.

"Sony Pictures was extremely enthusiastic about bringing it back for this special occasion, and the timing of the upcoming Ghostbusters film made this the exact right time."

Hi-C Ecto Cooler will be sold in ten-packs of 6oz juice boxes and in six and 12-packs of 11.5oz aluminium cans.

The cans, which will be available in select locations of the US including major online retailers, feature thermal ink printing technology that turns a shade of slime green when chilled.

Image: Hi-C Ecto Cooler to be re-launched by Coca-Cola. Photo: courtesy of THE COCA-COLA COMPANY.