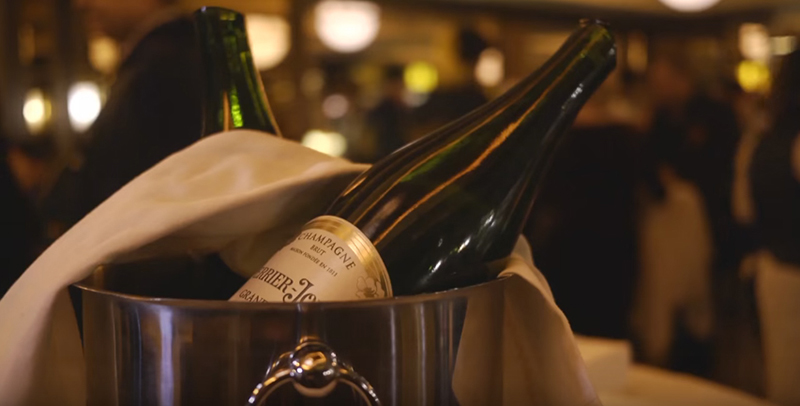 Just after the French Revolution, when the sabre was the weapon of choice in Napoleon’s light cavalry, the leader’s victories across Europe gave the Hussars plenty of reason to celebrate. And during these celebrations, the cavalry would open the champagne with their sabres, encouraged perhaps by Napoleon’s own declaration: “Champagne! In victory one deserves it; in defeat one needs it.”

But despite being over 200 years old, the tradition is being given a new lease of life at a London steak restaurant. Hosted by Grand Commander of the Confrerie du Sabre d’Or Nathan Evans at Covent Garden’s Smith & Wollensky – and in association with Champagne Perrier-Jouët – the evening was spent inducting people into the tradition of sabrage.

Mixing champagne with a cavalry sword doesn’t exactly sound like a recipe for success, but under the watchful eye of Evans and fellow échevin David Herbert, guests lined up to learn the art of sabrage and try it for themselves.

After identifying the seam that runs from the bottom to the top of the bottle, and following it up to the crown, the weakest part of the bottle can be found where the two seams meet. This is where we are told to aim for with the sabre. Gripping the bottle with your weaker hand and holding a sabre in the other, the idea is to firmly strike the weakest part of the bottle, hitting the sweet spot in one clean motion. The key, we are told, is a good follow through, so that the whole of the collar comes off with the cork still inside.

As the first guests tentatively stepped up to the plate, there was mixed success – some proving to be naturals and sluicing the bottle in one swift movement, others taking a few attempts to behead the champagne (I fell into this latter group, taking three strikes before the cork flew off, completely missing the curtain set up to catch the flying bits of bottle).

“You’re now a member of the Confrerie Du Sabre D’or,” Evans tells me, before tapping me on each shoulder with the sabre, as if being knighted. Translated as ‘The brotherhood of the golden sabre’, the order was founded in France in 1986 with the purpose of “promoting the enjoyment of champagne and the lifestyle of fine wining and dining”. And the evening certainly lived up to this expectation, with champagne flowing and canapés abounding. But the real beauty of opening champagne bottles using the art of sabrage, according to Evans? They must be drunk!