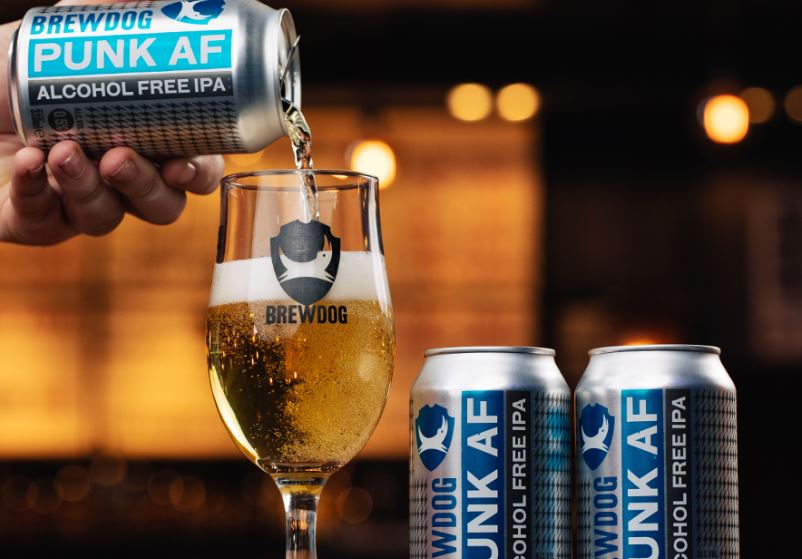 Over a decade after it first entered the craft beer market, BrewDog, a Scottish multinational brewery, has launched a new alcohol-free IPA range: Punk AF.

With an aim to shape the alcohol-free market in true BrewDog fashion, the new release is made with both traditional and dry hops and contains only 0.5% ABV. It is touted as a beer that brings ‘all of the flavour – but none of the alcohol’. Yet, with hundreds of similar craft breweries setting up shop across the UK every year, is it really enough to stand out from the crowd?

The UK has seen a shift towards teetotalism in younger generations, the practice and promotion of abstaining from alcohol.  According to the latest statistics from DrinkAware, 20% of UK adults aged 16 and over said that they did not drink alcohol in 2017. Trends such as this have clearly compelled BrewDog to jump on the bandwagon, releasing its second low ABV beer nine years after its initial entry into the market with Nanny State (0.5% ABV) in 2010.

According to GlobalData’s Q3 2018 consumer survey, 44% of UK consumers are always or often influenced by personalisation claims that cater to their needs when choosing alcoholic products. With its unorthodox and authentic punk positioning, BrewDog is well placed to tap into a younger consumer base that is looking to reduce their alcohol intake whilst maintaining the lifestyle associated with drinking.

The craft beer market in the UK is nearing saturation. UHY reports that growth in the total number of breweries in the UK has been the ‘slowest in five years’, with just eight new openings in 2018, as compared to 430 in 2017. This suggests that the market is getting tougher for new entries, with many large, multinationals monopolizing the market. This also poses challenges for established brands such as BrewDog, as competition for shelf space will likely increase.

This can be mitigated by focusing on experimental and fun offerings, with 75% of UK consumers prioritising unique and enjoyable claims when choosing alcoholic products, as per the GlobalData Q3 2018 consumer survey. By incorporating this with the aforementioned personalisation claims, manufacturers such as BrewDog, which has strong capital backing, will be able to set itself apart from the competition.

Punk AF seems to be playing it safe. Although BrewDog’s new launch is in keeping with the times, it does little to revolutionise the market as seen in its earlier offerings. Customers are growing accustomed to the current plethora of similar craft beers available. Should BrewDog want to expand further, it must look back at its risk-taking roots to offer consumers something truly groundbreaking.